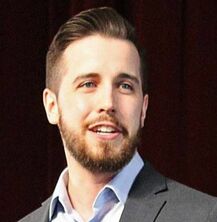 ABOUT MARK HENICK ​
Informed by his direct experience with stigma and the mental health care system, Mark Henick dedicated his life from an early age to opening minds and creating change.
​
Mark is the principal and CEO of Strategic Mental Health Solutions, a boutique consulting firm that specializes in helping organizations and individuals to move strategically from basic mental health awareness toward meaningful, measurable action.
He has previously served as the youngest president of a provincial Canadian Mental Health Association division in history, the youngest member of the board of directors for the Mental Health Commission of Canada, and a national spokesperson for the Faces of Mental Illness campaign. He has worked as a front line mental health counsellor, and the manager of a national workplace mental health training program. Prior to his present role, Mark oversaw the Fund Development and Marketing & Communications portfolios for the Canadian Mental Health Association as National Director of Strategic Initiatives.

Mark holds a Master of Science in child development, a Bachelor of Arts with interdisciplinary honours focusing on psychology and philosophy, and certificates in trauma counselling, suicide intervention, mental health first aid, and knowledge exchange.

Today, Mark is sought after public speaker and active media commentator on issues related to mental illness and mental health.
Mark has appeared in more than a hundred television segments, and countless more radio, print, and online features about mental health. His work has frequently appeared across Canada by media such as CTV National News, Entertainment Tonight, and The Globe and Mail; in the United States by CNN, the Chicago Tribune, and The New York Daily News; and in the UK by The Independent, The Daily Mail, and The Sun. He has also appeared around the world in, AsiaOne (Singapore), Trud (Bulgaria), The Epoch Times (China), Reader’s Digest, Buzzfeed, and The Huffington Post, among many others.

Mark brings a diverse and unique perspective of someone who has been a patient, a professional, and a policy influencer in the mental health system. He lives with his family in Toronto, Canada
ABOUT THE DAY:
Trauma gives many of us the most explicit possible experience of our humanity. Whether we're working with our own, or that of somebody else, how we listen to and talk about stories of trauma can hold us back or build us anew. Join us with Mark Henick for a very special day long workshop as he explores life after trauma, how he got there, and what he has learned along the way. Mark's TEDx talk on suicide is one of the most watched in the world. It has prompted thousands of people to reach out, to share, and to own their story, and it sparked a globally viral search for the stranger in the light brown jacket who in a moment changed Mark's life forever.

In this intimate, interactive session, you will learn about some of the strategies that Mark has learned along his personal and professional mental health journey, you will grow in comfort in reflecting on your individual practice and how you bring your most human self to relationships in which someone is struggling, and you will leave feeling part of a community and feeling empowered in your ability to create meaningful moments in people's lives.

At Grounding Trauma 2019 We Will Propel Change.

You Can Be A Part Of It.

Trauma is a large, complicated issue. We find that people often ignore it and focus on a particular issue and/or approach. Others pedestalize trauma, focusing on it exclusively with such energy other critical parts of the persons story are missed. Trauma needs to be grounded in the full experience of the individual and approached with balance and openness.

And, as trauma is as complicated as life itself and our understanding of it is continuing to grow, an annual  conference is intended to bring you quality, leading edge education and an experience that will connect you to others with similar work, and passions.

Do you:  Then this conference day is for you!  Join us at Grounding Trauma this May in Ottawa!

Email regehr@cast-canada.ca to reach out about potential opportunities.